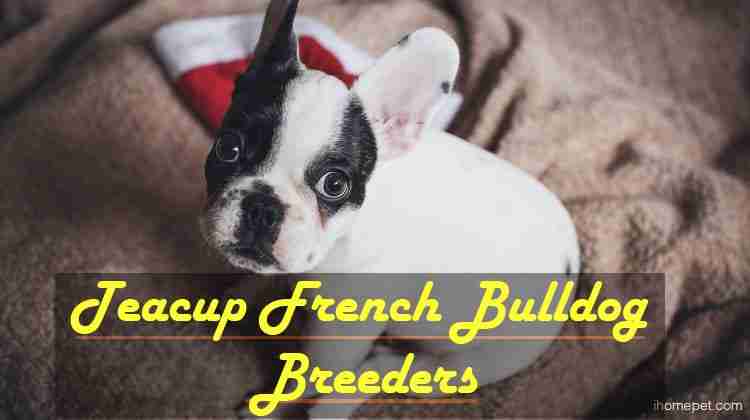 The love for and popularity of teacup dog breeds is growing by the day, more so among celebrities. Of these dogs, the cutest has to be bought from the most reputable Teacup French bulldog breeders.

The bat-like ears add to their overall cuteness and adorability. You might have seen one on the red carpet and thought damn! I must have that. Before you bring her home, let us first learn one or two things about these beauties.

What are Teacup French bulldogs?

The French bulldog is considered as the sixth most popular dog breed in the United States. They are good with the family and form very good companions. Of late, there is a trend of breeding dogs as small as possible because people are getting to love these small breed dogs.

The resulting small dog is referred as a teacup dog. The popularity and curiosity around these breeds have resulted from being spotted with celebrities such as Paris Hilton.

The “small” Frenchie results from the pairing of the smallest of the litters. This results in the smallest dog as possible. Teacup French Bulldog Breeders should ensure the perky, bat-like ears are always retained.

Physical attributes of a teacup Frenchie

The pint-size aside, these adorable dogs come in various color coats. It could be solid black, brown, white or a two-tone pattern. The sizes will vary depending on the sizes of the ‘parents’ and the breeder.

Their weight never exceeds 18 pounds and some may weight only 12 pounds. The teacup title is gotten from their pint-size as they rarely surpass the 12 inches mark height wise.

Here is a Teacup French Bulldog.

Personality of the Teacup French Bulldog

Just as their more grown-up counterparts, teacup French dogs share most of the traits with them. They are known to be among the best companion dogs around. Their small demeanor makes them easy to handle and well behaved when around people and other animals.

When it comes to being mischievous, being clownish and stealing attention, no dog does it quite like a Frenchie. This little dog craves for constant attention and really adores people.

Due to their small size, they do not require much exercise, although morning and evening walks could do them good. Playing chase balls both indoors and outdoors gives them pleasure at times.

At night, they would be glad just to curl and relax on the sofa. Do not expect any teacup to get into fights with other dogs. During training, they quickly learn simple commands.

Any health issues with this dog breed?

Teacup French Bulldogs are no exception when it comes to dog health issues. However tiny, they are still dogs, aren’t they? One of the health issues you should be concerned about is Allergies.

This is mainly for the food they are fed on. Whenever feeding her, you should watch out for any potential reactions particularly when changing the food type. Another common issue is Hip Dysplasia.

Hip Dysplasia is a common occurrence in Bulldog breeds. X-ray examinations have to be scheduled, and the issue sorted out when detected. This should be done exclusively by only a qualified vet. This problem can be genetic hence vigilance should be exercised when purchasing the dog from any of the professional Teacup French Bulldog breeders.

Just as is common with all Teacup Dogs, doctors frequently warn owners of teacup bulldogs about certain health issues. These include; hypoglycemia, collapsing trachea, heart defects, seizures, digestive problems, respiratory problems and blindness. Always be in touch with your vet when you own this dog breed.

How to care for your Teacup French Bulldog puppies

Owning a fragile dog as a teacup bulldog calls for extra care and vigilance from you. They should never miss a meal as their sugar levels could drop to dangerously low levels.

The small size also makes these dogs lose heat rather quickly. You need to put in place measures of keeping them warm. Sweaters are a great idea. The small, fragile bones demand that you do not step on her. You should also prevent her from jumping or falling from furniture.

Have fun with your cute dog

When considering Teacup French Bulldogs, ensure you do your research and homework well. This will guarantee you the healthiest animal around, devoid of hereditary health conditions. Always make sure that you get your dog only from well-known professional Teacup French Bulldog breeders.