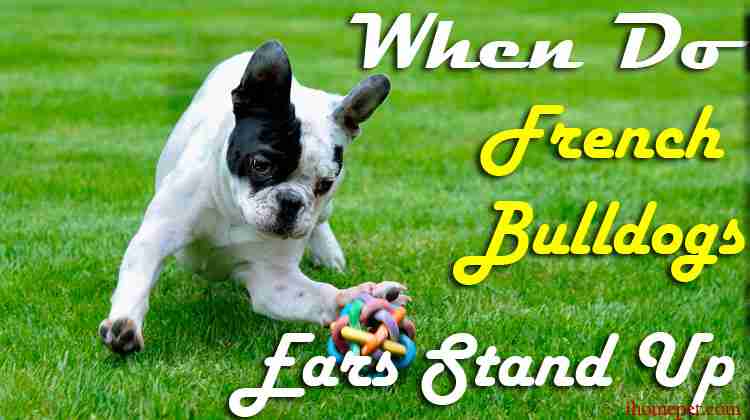 What do you love most about your French Bulldog? Is it the fiery flat face? Short physique? Sheer pulling power? Whatever reasons you have for loving your Frenchie, their perky ears are definitely on that list. Those bat ears are just too adorable. That is why you could be wondering “ when do French Bulldogs ears stand up ” since your Frenchie’s are not up there yet. How soon or later? You’re in the right place

The process that a Frenchie undergoes before her ears stand up is a very entertaining one. It might leave you wondering whether her ears will stay floppy forever. During this time, the ears perform all manner of the circus.

One day one is up, the next day its down while the opposite one is up. When do French Bulldogs ears stand up? You may ask yourself after observing this funny pattern.

Why Do the Ears Dilly-dally in Straightening?

As for teething kicks off in your puppy, most of the attention is given to this process. This means that most, if not all of the calcium in the puppy’s diet are channeled towards the development of teeth.

What this means is that only a very small quantity is available for the development of the puppy’s ear structure. At this stage, preference is given to teeth growth. Well, who would not? The puppy has to be able to chew her own food and not have some fancy ears that you adore.

The period when this teething process stops is what determines the answer to the question, “when do French Bulldogs ears stand up”. At this time, normal calcium distribution will have been restored. The necessary ear structures will be formed, and the ears will just get up on their own.

When Do French Bulldogs Ears Stand Up? 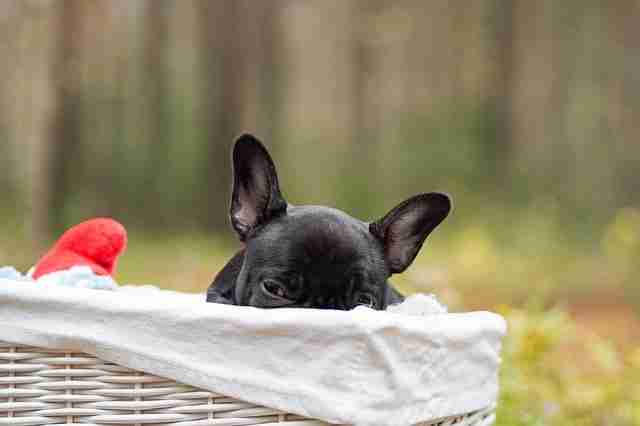 There is no distinct or specific time frame within which the Bulldog’s ears will have stood up. Every puppy has his/her own time frame, even for those from the same litter. Every individual’s ears will stand up at their own opportune time.

Some puppies normally have erect ears when they are 4 weeks old. There are others whose ears start to go up after 3 months. These are often the majority of the Frenchie puppies. Then there is a lesser percentage that develops perky ears at the age of 7-8 months.

The time this process takes will not be the same for all puppies but depends on an individual puppy’s growth pattern and the level of calcium in their diets.

At the age of 5 months, the ears should begin the wobbly behavior, standing upright some of the time. It could be all the ears at once, or the ears may stand upright alternatively. If by past this age the ears are still not showing signs of getting up, then you need to take some measures of helping out or speeding up the process.

This is the most recognized method of helping out the puppy’s ears stand up. A little help will go a long way. The taping process uses a 1.4-inch-wide tape. The tape should not be too flimsy and should be easy to remove.

First, carefully wrap individual ears with a length of the tape. The ear should be flat when being wrapped so that they don’t appear folded when the tape is removed. After wrapping each ear, orient them on the puppy’s ears, one at 11 o’clock and the other at 1 o’clock. Naturally, standing ears will be at these positions.

Lastly, join both ears with a length of the tape. Join from the front and back. This gives reinforced support. Regularly remove the tape for about 3 months.

You can also refer to other ways below:

Be patient with your Puppy’s Ears

Upright bulldog ears are what adheres us to this breed, and that is why you are concerned with knowing the answer to the question “when do French Bulldogs ears stand up” The time and age at which this occurs are different for various puppies, but it will happen eventually.

If it is taking too long for the ears to get up, you can then tape them upright on the puppy’s head for some time. Alternatively, you can increase the calcium uptake in the dog’s diet. All in all, do not panic if your puppy is taking too long, the adorable ears will soon pop up.