Over 7.2 million American households have fish tanks; is yours one of them? If so, you might be someone who’s always on the lookout for vibrant and interesting specimens.

For saltwater aquariums, one interesting fish you might want to consider is the mandarin goby. This fish has such a wild splash of color across its body that it’s highly sought-after.

Thinking of getting a mandarin goby fish? Then keep reading. We’ll give you the ultimate guide on how to take care of one. 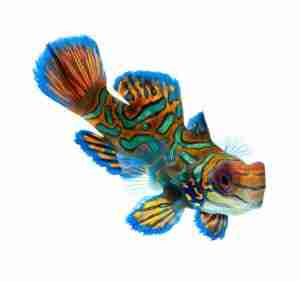 What Is the Mandarin Goby?

The mandarin goby is also known as the mandarin dragonet; its scientific name is Synchiropus splendidus. As its name implies, they’re quite splendid to look at. Not only do they come in an array of colors, but they also have different patterns, such as spotted or striped.

This fish originates from the Pacific Ocean, but since the fishkeeping industry is a lot more advanced nowadays, you can buy them from practically anywhere in the world. Expect to pay anywhere from $20 to $40 for one fish; the price will depend on the size and colors found on it.

As you’d expect, the mandarin goby is one of the most popular fish for enthusiasts. While they may be a little hard to take care of for beginners, they’re still generally considered an easy fish for tanks. This means practically any fish hobbyist can get them, so long as they have a saltwater tank!

The mandarin goby grows up to 4 inches long. Their lifespan will depend on which species you choose for your aquarium.

The good news is the mandarin goby is a peaceful fish. They can be shy, so make sure you have hiding places for them, such as caves and hidey holes; coral reefs make excellent hiding spots. Their good temperament means you can keep them with other similar fish.

This fish is a slow-moving one, so you won’t see it dash about the tank. They’ll spend the majority of their time finding food at the bottom of the tank. Even though they’re slow, you’ll still have a great time admiring their coloring from afar.

If you want to add more tankmates, make sure you do it slowly so they can adjust. Due to their shy nature, mandarin gobies can take a while to get used to new fish in their waters.

The bad news: the males can sometimes fight with one another, so if you pick a male, you’ll want to only have one in the tank. You can have one male with females, or females only in your aquarium to avoid trouble. If you want to have 2 males in your tank, then you have to ensure the area’s large enough where they can have their own territories.

What Do They Eat?

This type of fish eats worms, copepods, fish eggs, and small snails. The mandarin goby will feed throughout the day whenever they can find any food.

In the past, it was thought that the mandarin goby could survive solely off of copepods from live rock. But the problem was they’d soon deplete the whole take of the copepods, and then they’d starve to death since they had no food left.

Today, goby enthusiasts have found a better way to feed them. In addition to copepods from live rock, aquarists also feed their gobies live brine shrimp and frozen Mysis shrimp. If you decide to go this route, you’ll have to wean your fish to get them accustomed to this new food.

When feeding them anything that’s frozen, make sure you thaw it first. That way, it won’t mess up the temperature of the tank.

What Are Their Tank Requirements?

A good rule of thumb is to house your mandarin gobies in a tank that’s at least 20 gallons. They love to have plenty of room to swim around in, so the bigger tank you can get, the better. An optimal tank size would be 29 gallons or more.

You should keep the tank at a temperature between 72 to 82 degrees. Since they’re sensitive to the water they’re kept in, you’ll want to check the water temperature daily as well as the filter and other equipment you have in your tank.

The water quality will be more forgiving; you only need to check it every week. Another thing you’ll need to do is change around 25% of the water every few weeks or so to keep it clean.

And, again, since the mandarin goby is shy, you’ll want to introduce new specimens to the tank slowly so they adjust better. Make sure you don’t have larger fish that eat the same food, as they won’t be able to be fed properly if you do.

Good Tankmates for the Mandarin Goby

In general, most fish that are the same size as the mandarin goby are good candidates as tankmates. Since they aren’t competitive with food, you’ll also want to find tankmates that are peaceful feeders.

Here’s a nice list to work from if you’re wondering about the compatibility of your fish with the mandarin goby:

While you should have love rocks and coral reefs in your aquarium, avoid putting anemones in. They can eat your mandarin gobies!

For more information on mandarin gobies, this interesting blog post has some quality details on these interesting creatures.

Get a Mandarin Goby or Two for Your Tank

As you can see, the mandarin goby is a must-have for any reef tank. They’re extremely beautiful, plus they’re peaceful.

If you do decide to get these magnificent creatures, just make sure to follow our guide. By providing an optimal environment for them, you’ll see them thrive.

Visit it this website for more interesting pet care reads,  and also please check out our other blog posts.