Everyone enjoys cats, even Abraham Lincoln, who kept several of them at the White House during his presidency. Cats have been around since the beginning of life on earth. We know that cats have been revered for centuries, as they are depicted in art and relics found all over the world.

Back in the day, the ancient Egyptians treated cats as gods. Today, we still love and worship our cats, even if we don’t believe they are gods. Cats are also pretty darn interesting, and we’ve got 10 facts about cats that you probably didn’t know. Ready? Read on!

10 Cool And Interesting Facts About Cats 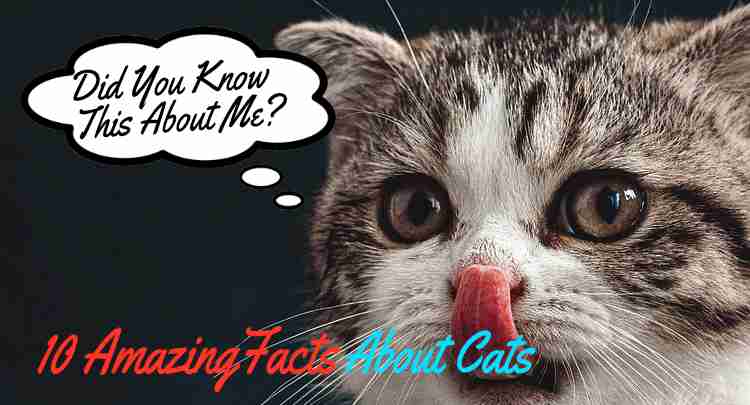 Cats have a special way of communicating with other cats by using their front paw to rub against each other. Neutered males will often groom each other as a sign of friendship.

Cats have been domesticated for thousands of years, and cats love to play and explore the world around them. When it comes to your feline friend, there are some fascinating facts about these furry friends that many people may not know.

The cat’s purr is known to promote healing in humans and animals. Many cats spend tons of time licking themselves to keep their fur soft and clean. Most cats use their tongue to self-heal any minor wounds that they might encounter. Let’s go over some fun facts that every pet owner should know:

That’s right. Cats have kidneys that are able to filter out salt and use the water anyway. This is unlike most mammals and surely nothing like humans, who would die.

Your cat could survive on a deserted island at sea by drinking ocean water, and he would thrive. Not to mention that the beach would be one big litter box.

Scientists think that it is a genetic mutation that has caused this issue for your cat. They are not able to detect when something is sweet. They may enjoy a sweet treat because they like the way it tastes, but it doesn’t necessarily taste sweet to them.

This may or may not be linked to the fact that cats are susceptible to developing type two diabetes. Still, it is very sad when you imagine that you can never share the love of a sweet brownie or cupcake with your cat. He won’t understand.

#3 Cat noses have fingerprints … sort of

The ridges on a cat’s nose are unique to each individual cat, just like fingerprints are to humans. Each cat has their very own one-of-a-kind nose.

Now, as far as using ink and paper to get a good nose print from your cat, you might wish to reconsider, as you are more likely to end up with a claw print on your own nose.

Cats can control the flow of blood in their bodies which helps them conserve energy during the day. Many cats may even have extra toes – this is called polydactylism, and it’s quite common in a real cat, although not all breeds have it.

Nikola Tesla was inclined to research electricity when his cat, named Macak, touched him and gave him a static shock. Most people would just say, “ouch.”

Tesla went on to make enormous breakthroughs in electricity, and it was all because of their sweet kitty, Macak. I think that Macak might just become the most popular cat name of 2019. Who’s in?

#5 A main coon cat made the “Guinness World Records.”

The honor of being the longest domestic cat ever goes to Barivel, a Maine Coon! It lives in Italy and is 120 cm long. The cat owner is proud of his pet cat and feels lucky to have such an extraordinary and popular pet.

#6 Domestic cats sleep most of their life

A nine-year-old cat will have slept so much that by the time he reaches that age, he’s only been awake for three years of his life. You thought hound dogs slept a lot. Domesticated cats are probably the most prolific sleepers in the history of the world.

Kittens need to sleep a lot because that is the only time that their body releases growth hormones. When you see a precious kitten falling asleep while sitting up, he’s not really sleeping – he’s growing!

Adult cats still sleep a lot. That’s not because they are still growing. They are actually just very lazy.

#7 You knew male cats are called “Toms” but what about female cats?

A female cat is called Molly. Now that you’ve used the expression “tomcat,” will you also use “Molly”? Remember that we live in the modern era of equality. You’d better give Mollycats their equal time or else face the consequences!

#8 Usain Bolt has nothing on a cat

Usain Bolt is the fastest man on earth, running and clocking in at a speed of 27 mph, but a domestic cat has been clocked at 30 mph. Sorry, Usain, we know this comes as a blow to your ego, but you’ve been smoked by a house cat.

In the original Italian version of Cinderella, her fairy godmother was actually a cat. I think I like that version better, how about you?

#10 At Disneyland, there are 200 feral cats prowling the park

At Disneyland, there are 200 feral cats prowling the park looking for prey. With their sharp peripheral vision and third eyelid, they can easily spot their next meal. These cats have four toes on their back paws and five toes on their front paws.

This helps them to be more agile when stalking other animals or evading predators. Most of these cats live at Disneyland to help keep the rodent population under control, as well as provide a unique experience for visitors to the park.

Last Fun Cat Facts That Most Pet Owners Should Know About

The first year of a cat’s life is equivalent to the first 15 years of a human life in terms of development. There are so many amazing cat facts that pet owners should know about. For instance, did you know that cats can smell the scent of catnip from up to 100 times farther away than humans?

Moreover, did you know the oldest cat to be recorded was Creme Puff from Austin, Texas, who lived to be an amazing 38 years old? The cat died on August 6, 2005. But the average cat tends to live for around 15 years.

Cats purr not only when they’re content but also in times of distress or pain as a way of soothing themselves. This is why it’s important for cat owners to pay close attention to their older cats and make sure they’re well taken care of.

Most cats can see colors better than humans, they purr when they’re content or happy, and they can jump up to five times their height. They also have excellent night vision and a knack for hunting prey with their sharp claws. Additionally, cats can remember people they meet even after a long time has passed by.

A home isn’t really a home without a cat to add to the family. Remember that cats are a possible 20-year commitment and that they’ll need a lot of care and attention. They’ll give so much in return if you take care of them. All these fascinating facts about cats make them one of the most interesting creatures on earth!